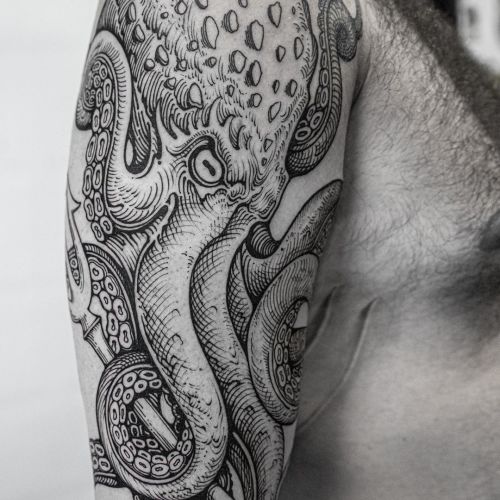 Woodcut is sometimes called the engraving tattoo. Associations with art, popularized in Europe in the Middle Ages, are not accidental and absolutely correct! Woodcut is an extravagant style of tattoo that draws on the graphic technique of relief printing called woodcut. It is also one of the oldest graphic methods known to mankind. The prints were obtained by covering a special matrix carved in wood with black paint. Modern tattoo artists who specialize in engraving tattoos also do not use color, creating monochrome patterns. The artist can fill the individual elements of the tattoo with black ink, but its base is formed by lines. Their density and arrangement give depth to the entire composition. Traditional shading methods are very rarely used in woodcut tattoos. Themes most often presented in the style of engravings are: nature, people, fantasy and mythical characters. Woodcut is great for directly replicating biblical scenes, legends or stories from medieval literature.